Is your tap water safe? Unfortunately, if you’re like the millions of Americans living near contaminated water sources, the answer is likely no.

In fact, you would be hard-pressed to find even one source of clean water in this country (or, unfortunately, worldwide).

It may seem startling, but with the advancement in industry and technology, our water systems are becoming more contaminated by the day. Whether it’s industrial waste or newly liberated elements that should be sequestered in stone, our land and water sources are teaming with metals that have a direct route into your drinking water.

Heavy Metals In Your Tap Water

Lead is a heavy metal that’s found pretty much everywhere in our environment. Of all the metals, this one is the hardest to escape. Everything from lipstick to paint to piping contains traces of lead.

Lead becomes a serious concern in older homes where lead piping is still used. When these piping materials corrode, the lead can seep into your drinking water. Lead can be found in pipes, faucets, and fixtures. Most lead pipes are found in homes built before 1986, as concern around lead becomes more front and center around this time.

The Safe Drinking Water Act requires the EPA to determine the level of contaminants in drinking water at which no adverse health effects will occur. For lead, that number is zero.

This is due to the highly toxic nature of lead and its tendency to bioaccumulate (accumulate in your cells and tissues).

Children are at the highest risk for lead toxicity as even small amounts of lead have been found to damage the nervous system. Some toxic effects of lead include[1]:

Arsenic occurs naturally in rock and soil and is widely used in agriculture and industrial projects. Arsenic can also enter our environment as a byproduct of copper smelting, mining, and coal burning.

There are two primary avenues by which arsenic can enter the water supply:

While #1 can be hard to control, #2 is where the real issues come from. In fact, some industries in the United States release thousands of pounds of arsenic into the environment each year. Once in the environment, arsenic sticks around for a long time and slowly enters groundwater. Arsenic is a common additive to pesticides and fertilizers, which means that many areas of land are being saturated with this metal, creating a toxic landscape[2].

Dangerously high levels of arsenic have been found in drinking water wells in more than 25 states in the United States, potentially exposing 2.1 million people to arsenic-contaminated drinking water[3].

Arsenic is classified as a known carcinogen and has also been associated with skin lesions, cardiovascular disease, and diabetes. Furthermore, when fetuses are exposed in utero, arsenic may result in impaired cognitive development.

Cadmium may enter drinking water in a similar way to lead via pipes and fixtures. Specifically, cadmium can be found in the zinc or galvanized pipes, cadmium-containing soldiers in pipe fitting, water heaters, water coolers, and taps[5].

Research from the EWG (environment working group) shows that 39 states have detected levels of cadmium in their water, serving 7.9 million people.

Several organ systems are affected by cadmium toxicity, including[6]:

What’s more, epidemiological evidence suggests that cadmium exposure may be related to various types of cancer, including breast, lung, prostate, pancreas, and kidney.

There is also some evidence that cadmium may play a role in osteoporosis[7].

Mercury is released into the environment through the natural weathering of rock or volcanic activity. However, with the advent of industrial practices like coal combustion, electrical power generation, and industrial waste disposal, we see more mercury in the environment than ever before.

Mercury makes its way into your water supply mostly through atmospheric deposition as a result of industrial practices. Unfortunately, once mercury is released into an aquatic environment, it can be converted to a biologically toxic form of methylmercury by microorganisms found in water and soil.

Research shows that mercury can be detected in virtually any body of water, with the highest concentration found in the waters of Eastern United States, particularly the Southeast coastal plain[8].

Much like the other metals listed here, mercury has a tendency to build up in your body and can be very challenging to remove. Some of the health implications of mercury toxicity include[9]:

Uranium is naturally present in soils and sediments in the environment. For millions of years, uranium was held captive in these formations, inaccessible and unable to be absorbed by humans.

Unfortunately, with the advent of chemical fertilizers, nuclear energy, and other industrial processes, uranium is being exposed to reduced minerals like nitrate, which liberate it into the environment. When uranium is free, it becomes water-soluble and leeches into the water supply.

The most common source of uranium exposure is through well water due to the breakdown of soil, along with manufacturing and nuclear energy pollutants.

A recent study conducted by U.S. researchers found that almost 2 million people in California and the Midwest live on aquifer sites that have up to 180 times the safe level of uranium[10].

Furthermore, when scientists from the University of Nebraska took some 275,000 groundwater samples for evaluation, they discovered that many Americans live about a kilometer from uranium-polluted wells [10].

Uranium can lodge into various tissues in your body. Once uranium enters your body, the kidneys are its main target, but it can also deposit in the bones, brain, lymph, lungs, and reproductive organs[11][12].

Uranium may also bind to DNA, leading to a host of genetic issues[10].

Is Your Water Making Your Body Toxic?

There are ways to test your water for metals, but if you’re wondering if your drinking water is safe — the answer is likely no.

I always recommend using a water filter at home. Unfortunately, many of the most popular water filters don’t do much in the way of actually removing metals. They may bind some chlorine or other impurities, but it takes the big guns to get the metals out of there.

When it comes to water filters, you really do get what you pay for. From my personal research, the water filters I most highly recommend are pH Prescription and Pure Effect Filters.

With that being said, if you’ve been drinking unfiltered (or moderately filtered) water, you very likely have some level of heavy metal toxicity in your body. The fastest and easiest way to determine if you have heavy metals in your body is by doing a hair mineral analysis (HTMA). Doing an HTMA is the best way to determine which metals are in your body, along with any mineral toxicity you may have. What’s more, this test also reveals information related to:*

Before you can begin working on your health, you must know what your deficiencies or toxicities are. The HTMA is your vital first step in this process.

There’s a lot of hype and marketing out there when it comes to health and wellness. This can make it confusing to figure out where to focus your attention and which area of information is actually valid.

When it comes to heavy metals, however, the threat is very real. Metals aren’t only polluting our water, but they’re in our soil, food, and the air that we breathe.

To protect yourself from metal toxicity in your water, get a high-quality water filter and stop using your tap immediately. Next, test yourself for heavy metals. Issues like headaches, fatigue, brain fog, stubborn fat, leaky gut, allergies, and so much more can all stem from heavy metal toxicity. To get to the root of these and other symptoms, you must do a hair mineral analysis (HTMA), so you can begin reclaiming your health.

*Disclaimer: These statements have not been reviewed by the FDA. A Hair Mineral Analysis (HTMA) is not intended to diagnose, treat, cure, reverse, or prevent any disease. It is not intended to replace any other medical test(s( that may be prescribed by your medical doctor.

Anti-EMF Diet: These Nutrients Are Your Inner Shield
The Hidden Reason You’re Not Losing Weight #50 Gluten free on a budget with Jennifer Fugo What Grains Are Safe to Eat? 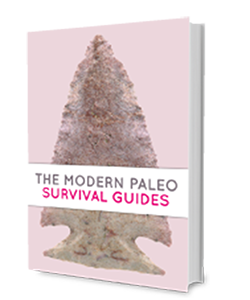