Glyphosate and Your Gut - Are You Safe? - Myersdetox.com Glyphosate is the most widely used herbicide in the United States, and its use continues to grow as farmers push to extend their production yield. You’ve likely heard of glyphosate, but if you’re like most people, you may have only heard soundbites here and there about its impact on human health.

What Is Glyphosate (Roundup)?

Back in the 1970s, the company Monsanto developed an herbicide called Roundup, which included glyphosate as its main ingredient. Originally, the herbicide was developed for large-scale farming practices, but today its use has spread to consumers as a popular weed killer.

As a potent pesticide, glyphosate helps to ensure the health of a farmer’s crops. Fewer weeds means a greater yield as weeds compete for the nutrients that crops like corn, oats, soybeans, and wheat need to grow strong and healthy.

On the surface, this sounds like a win-win; unfortunately, however, the World Health Organization made a startling realization in 2015 that glyphosate is likely carcinogenic to humans. While you may think this sent farmers and manufacturers into a frenzy to remove glyphosate from the food chain — the opposite is true.

Aside from the potential carcinogenic activity of glyphosate, a lesser talked about, but equally dangerous, side effect is its detrimental impact on gut health.

As the use of glyphosate has steadily increased over the past two decades, immune and neurological disorders have simultaneously begun to rise. Coincidence? Not likely.

Research shows that glyphosate has a direct impact on the health of your microbiome. Specifically, when glyphosate interacts with your gut bacteria, it increases the number of harmful microbes while reducing the beneficial strains.

The health of your gut is directly related to your immune system and nervous system. This means that when you mess with your gut health, you’re messing with your neurological and immune health as well.

When viewed from this perspective, it makes sense that as the use of glyphosate has continued to increase over the last 20 years, conditions like autoimmune disease and neurological disorders are showing up in greater numbers as well.

Some examples of these conditions that have been tied to glyphosate include[2][3]:

While human trials are still lacking, animal and in vitro research shows that glyphosate can disrupt the lining of your intestines, causing intestinal permeability, also known as “leaky gut[4][5].”

With a leaky gut, proteins and other compounds that would typically be broken down before entering your internal circulation are allowed to pass through, creating challenges for your immune system, often resulting in autoimmunity.

This is also why many people are experiencing celiac disease or gluten intolerance these days more than ever before[7].

Furthermore, a leaky gut is also said to lead to a “leaky brain,” which is described as a breakdown of the blood-brain barrier that protects your brain from harmful compounds. When this barrier breaks down neurological conditions like Autism, Dementia, Alzheimer’s, and depression[6].

The Problem With Glyphosate Excretion

To compound the concerns around glyphosate and its detrimental impact on your gut health, it appears that even the detoxification process of glyphosate may produce dangerous outcomes — particularly concerning your liver.

Glyphosate interferes with something called cytochrome 450, an enzyme that’s vital to detoxification. As it slows down this enzyme activity, it increases its own longevity in your body. The result is an accumulation of glyphosate in your organs of elimination like your liver[*].

This liver toxicity then results in problems like inflammation, reduced antioxidant activity, the formation of fibroid tissues, and ultimately liver diseases like Non-Alcoholic Fatty Liver (NAFLD) and Nonalcoholic steatohepatitis (NASH)[8][9][10].

Therefore, in order to properly excrete glyphosate from your body, it’s vital that you support your liver’s detoxification process with nutrients that can push this compound out.

Supporting the excretion of glyphosate is vitally important to your health, but the process needs to be taken with care. That’s why focusing on specific nutrients that can enhance your liver’s ability to remove unwanted compounds is essential.

I created Daily Detox as a way to enhance the function of my liver on a daily basis without having to take too much time and effort. Daily Detox is a combination of hand-picked nutrients that are proven to support your organs of elimination and specifically enhance the activity of liver detoxification.

The ingredients include research-backed foods and herbs like turmeric, milk thistle, Schisandra, burdock, broccoli sprouts, moringa, and much more.

Broccoli sprouts, in particular, are known for their potent liver-detoxification benefits as they contain a compound called sulforaphane which has been shown in numerous studies to support liver health as well as detoxification and the clearance of harmful compounds[11][12][13].

Beyond focusing on your liver, Daily Detox offers a way to support gut health, antioxidant defenses, and general metabolism as well.

The idea is that you come into contact with toxins every day, whether they be from the foods you eat, the water you drink, the air you breathe, or even the cosmetics you use. Despite your best efforts, the challenge to steer clear of all toxic compounds in the modern world is far too great for anyone to take on, so our best option is to combat the harmful impact with a supportive supplement. In just 30 seconds a day, you can flood your body with a cascade of nutrients that support your organs, cells, and tissues and enhance your body’s defenses against the everyday toxins you come into contact with.

Even the most diligent among us may find that when they eat out, they’re introducing unwanted levels of glyphosate into their bodies. It’s nearly impossible to only eat food that is sourced organically, so the glyphosate issue is really a problem that everyone must be aware of. With that being said, choosing nutrients that optimize liver function can go a very long way in supporting your body’s defenses against this nasty compound.

How To Avoid Glyphosate

As previously mentioned, it’s nearly impossible to avoid glyphosate altogether. However, there are ways that you can diminish the amount of glyphosate you ingest.

Glyphosate is found primarily in foods that are genetically modified to resist the herbicide. Therefore, if you want to avoid glyphosate, the first thing you should do is avoid all GMO foods (as much as possible). The top offenders include corn, soy, wheat, and oats.

When in doubt, to veer on the side of safety, look for the GMO Project Verified label on your foods; this means that the product you’re buying has passed the tests and is GMO-free.

Another way to reduce your glyphosate exposure is to either eat out at restaurants less or be more discriminating when it comes to choosing the restaurants you go to. If a restaurant serves high-quality foods, it won’t be shy about it. Look for verbiage like “farm to table,” “Organic,” and “locally sourced.”

Although food may be plentiful in the United States, our food quality leaves much to be desired. Unfortunately, nearly all wheat and oats in the United States are contaminated, as well as most soy and corn. What makes this predicament even more disturbing is the lack of change that we see from a regulatory standpoint.

Therefore, it’s up to you to take action on your own behalf.

Start by limiting your exposure to glyphosate by eliminating GMO and nonorganic foods from your diet as much as possible. This will cut down on the burden that glyphosate has on your liver, immunity, digestion, and neurology.

Next, include liver-supportive nutrients into your diet and supplement regimen that can help your body push out any glyphosate that’s already there. My personal practice for this is a dose of Daily Detox each day.

*These statements have not been reviewed by the FDA. Supplements like Daily Detox are not intended to cure, treat, or prevent any disease. Please speak to your doctor before starting any supplement regimen. #115 Methylation and Genetics with Michael McEvoy 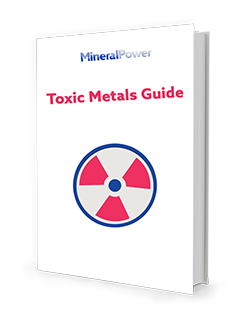