Nicolette Hahn Niman is here to defend the case for eating beef! Especially the healthier option of grass-fed beef. She has so much interesting information about how beef is actually healthy and does not cause disease.

As an environmental attorney and the author of Defending Beef, Nicolette has definitely done the research to prove these claims and many more. She is also a vegetarian!

Nicolette Hahn Niman is an environmental advocate, cattle rancher and author of Defending Beef. She previously served as senior attorney for the Waterkeeper Alliance, running their campaign to reform the concentrated production of livestock and poultry. In recent years she has gained a national reputation as an advocate for sustainable food production and improved farm-­animal welfare. She is the author of Righteous Porkchop (HarperCollins, 2009) and has written for numerous publications, including the New York Times, Los Angeles Times, Huffington Post, and The Atlantic online. She lives on a ranch in Northern California, with her husband, Bill Niman, and their two sons. 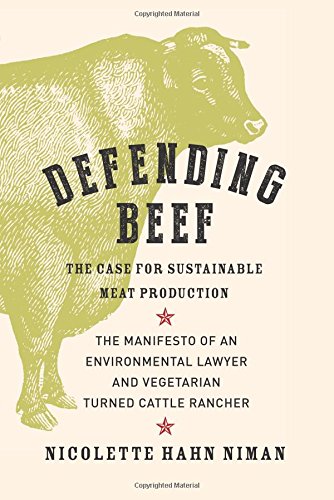 and beef are public enemy number one. But is the matter really so clear cut? Hardly, argues environmental lawyer turned rancher Nicolette Hahn Niman in her new book, Defending Beef.

The public has long been led to believe that livestock, especially cattle, erode soils, pollute air and water, damage riparian areas, and decimate wildlife populations. In Defending Beef, Hahn Niman argues that cattle are not inherently bad for either the Earth or our own nutritional health. In fact, properly managed livestock play an essential role in maintaining grassland ecosystems by functioning as surrogates for herds of wild ruminants that once covered the globe. Hahn Niman argues that dispersed, grass-fed, small-scale farms can and should become the basis for American food production, replacing the factory farms that harm animals and the environment.

While no single book can definitively answer the thorny question of how to feed the Earth’s growing population, Defending Beef makes the case that, whatever the world’s future food system looks like, cattle and beef can and must be part of the solution. Up At Night? How EMFs Affect Sleep