5 High Mercury Foods to Avoid and How to Detox it - Myersdetox.com 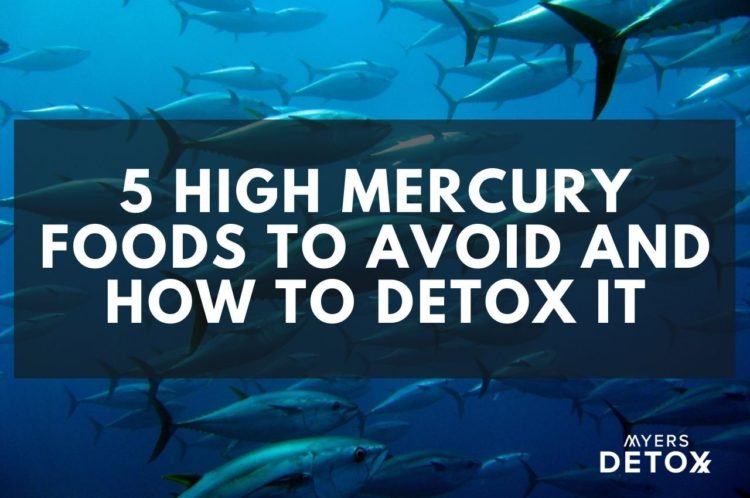 Mercury is one of the most dangerous toxins in our modern environment. It’s a heavy metal that’s common in traffic and air pollution, amalgam dental fillings, soil, and even our food.

Here’s why you need to be careful: Mercury can impact normal brain and immune function. And a wide variety of symptoms may be traced back to mercury exposure, ranging from headaches and fatigue to brain fog and more.

Because we’re exposed to small amounts of mercury every day, mercury toxicity can be hard to catch. It doesn’t cause sudden, dramatic illness; instead, it slowly builds up in your tissue, causing gradually worsening a variety of related issues over the course of years.

It’s essential for your long-term health that you protect against daily mercury exposure and detox on a regular basis, to assist in the detox of any stored mercury in your system.

Food is the number one source of mercury exposure in humans. [1] Pesticides, pollution in soil, and other mercury sources end up in our food supply, and eventually in our bodies.

But if you avoid a few high-mercury foods, you can reduce your mercury exposure by a significant amount. Here are five common foods that contain mercury.

Seafood is the most common source of mercury in our diets.

Mercury released from coal-burning plants ends up in the environment, and water is one of the main places it settles. [2]

This process is called bioaccumulation and it continues up the food chain. The longer a fish is alive, the more small fish it eats, the more mercury it absorbs across its lifetime.

One of the best ways to reduce your mercury toxicity is to avoid high-mercury seafood. High-mercury fish include:

It’s worth noting that, while larger tuna species are high in mercury, canned skipjack tuna is still an excellent choice for seafood. Skipjack tuna doesn’t grow nearly as large as other tuna species, and as a result, it has far less mercury. I recommend avoiding the several types of tuna sold at sushi restaurants. I think it’s fine to eat canned tuna fish.

I don’t entirely agree. You want to avoid throwing out the baby with the bathwater. Why avoid a food group entirely when you know you can detox out any mercury you consume? You can take citrus pectin, chlorella, cilantro and many other substances to detox mercury.

I think it’s a mistake to avoid seafood solely due to mercury or metal concerns. Most of our food supply today contains metals and chemicals and pesticides. So unless you plan to become a breatharian, it doesn’t make much sense to avoid fish.

Enjoy your fish and the many many health benefits of seafood consumption. Seafood is an excellent source of omega-3 fatty acids, minerals like selenium and high-quality protein.

Just make sure you avoid fish that are high in mercury (or eat them only occasionally) and focus consumption of fish that are small like sardines, herring, anchovies, mackerel and salmon. They tend to have very little mercury due to how long they live. For more guidance on fish consumption, read my Seafood Survival Guide.

Many industries have been phasing out mercury cell production due to poisoning concerns, but high-fructose corn syrup manufacturers still use the process.

The average American consumes 50 grams of high-fructose corn syrup a day, which is enough to cause serious mercury toxicity over time. [5]

And even if you consume far less, mercury builds up and is hard to remove from your body, so every little bit matters. Your best bet is to avoid high fructose corn syrup.

A recent study looked at heavy metal content in a variety of food coloring agents.

Researchers discovered that 20% of the food coloring samples were contaminated with mercury, including samples that contained “natural colors” instead of artificial food coloring. [6] Several samples also contained arsenic.

A lot of processed food manufacturers list “natural colors” on their ingredient label. The phrase covers a wide variety of coloring agents, ranging from spices to extracts of insect parts. [7]

Some natural food colorings are made by combining natural compounds with aluminum and lead. [7][8]

Between mercury, arsenic, lead and aluminum, your best bet is to avoid food coloring, whether it’s natural or artificial. Stick to eating high-quality whole foods as much as you can.

Duck eggs are another potential source of mercury.

Ducks are often raised free-range, where they’re free to eat fish and insects that live in water. As global pollution worsens, ducks are at an increasing risk of mercury contamination — to the point where researchers use wild duck eggs as a way to measure environmental pollution in an area. [9]

Several studies have found that mercury accumulates in duck eggs. [9][10] Duck eggs also accumulate other heavy metals, including lead and cadmium, as well as aflatoxin, a highly carcinogenic toxin produced by black mold. [11][12]

It’s in your best interest to avoid duck eggs. Eat chicken eggs instead.

Many factory farms save money by feeding their livestock fishmeal –the pulverized and dried remains of fish that are deemed unfit for human consumption.

The problem is that many of the fish are unfit for human consumption because they contain too much mercury. When you feed mercury-laden fish to cows, the mercury bioaccumulates in the meat, and humans end up eating the mercury anyway. [13]

Several studies have found that factory-farmed beef contains mercury, as well as cadmium and lead. [13][14]

Instead of factory-farmed beef and lamb, choose 100% grass-fed, organic meat. The livestock eat only grass and cannot be exposed to pesticides, which makes their meat far less toxic.

What to Do if You’ve Been Eating High-Mercury Foods

If you’ve been eating high-mercury foods or have or have had mercury fillings in the past, it’s essential that you do a mercury detox.

Mercury hides away in hard-to-reach parts of your body, including your brain, nervous system, liver and fat stores. It sits in your body, slowly sapping your energy and causing the hundred symptoms or more than mercury is known to cause.

However, if you mobilize too much mercury at once, it will release into your bloodstream in large amounts and cause detox symptoms. This is the biggest mistake people make when detoxing any heavy metal – they don’t take binders.

To detox safely, you want something that mobilizes mercury and binds to it, deactivating it and pulling it from your body.

That’s why I created CitriCleanse. It’s a gentle, yet effective toxin binder that you can use every day, and it’s specifically designed to remove heavy metals like mercury.

It’s also important to note that studies show that magnesium and selenium protect against damage from mercury and may help to eliminate mercury. [18] That’s specifically why I formulated Ageless AF to contain selenium.

CitriCleanse is effective, but it’s gentle enough to use as a daily detoxifier. It tastes like fresh citrus — just mix it in water and drink it every morning to support your body’s detox.

If you’re worried about mercury in food, CitriCleanse can help. Give it a try and see how you feel. You’ll notice a difference within a few days. We have so many testimonials from people telling us how much better they feel after starting CitriCleanse on this page.

And make sure you avoid high-mercury food. As our world gets increasingly polluted, it’s more important than ever to protect yourself from hidden toxins.

You can always detox metals out of your body, but it’s easier in the long run to avoid obvious sources of ingestion and exposure to protect your health.

How Heavy Metals Impact Thyroid Function
The Dirty Dozen: Harmful Ingredients to Avoid in Your Skincare #137 How Lack of Sleep Causes Illness with Dr. Roger Washington