#129 Nutrition and the Mind with Dr. William Walsh - Myersdetox.com Dr. William Walsh is the author of the astounding Nutrient Power. Dr. Walsh talks to me this week about targeted nutrient therapy, hair mineral analysis and other means to overcome mental health issues!

Click here to view the full transcript for #129 Nutrition and the Mind with Dr. William Walsh.

William J. Walsh, PhD, president of the non-profit Walsh Research Institute, is an internationally recognized expert in the field of nutritional medicine and a key scientist paving the way for nutrient-based psychiatry and nutritional medicine. Over the past 30 years, Dr. Walsh has developed biochemical treatments for patients diagnosed with behavioral disorders, attention deficit (hyperactivity) disorder, autism, clinical depression, anxiety, bipolar disorders, schizophrenia, and Alzheimer’s disease that are used by doctors throughout the world. His book, Nutrient Power: Heal Your Biochemistry and Heal Your Brain, describes the evidence-based nutrient therapy system.

Dr. Walsh’s noted accomplishments include: groundbreaking studies reporting reduced violent behavior following nutrient therapy, the 1999 discovery of undermethylation and copper/zinc imbalances in autism, the 2000 finding of metallothionein protein depletion in autism, the 2007 published study linking copper overload and post-partum depression, the identification of five biochemical subtypes of clinical depression, the 2011 development of the Walsh Theory of Schizophrenia, and the direction of the Beethoven Research Project that revealed that the composer suffered from severe lead poisoning.

In addition to Dr. Walsh’s ongoing research studies, he leads medical practitioner training programs in advanced, drug-free biochemical/nutrient therapies in Australia, Ireland, Norway, the United States and other countries. Dr. Walsh is a frequently invited guest lecturer having given more than 200 presentations at regional, national and international conferences and symposiums, including the American Psychiatric Association, the U.S. Senate, and the National Institutes of Mental Health. He has authored numerous peer-reviewed journal articles and scientific reports, as well as been granted five patents.

After earning degrees from Notre Dame and the University of Michigan, Dr. Walsh received a PhD in chemical engineering from Iowa State University. While working at Argonne National Laboratory in the 1970s, Dr. Walsh organized a prison volunteer program that led to studies of prisoners and ex-offenders researching the causes of their violent behavior. The collaboration with the late, renowned Carl C. Pfeiffer, MD, PhD, a pioneer in the field of nutritional research therapy, led Dr. Walsh to the development of individualized nutrient protocols to normalize body chemistry and brain chemistry. Dr. Walsh went on to study more than 30,000 patients with mental disorders acquiring an unparalleled database of more than 3 million chemical assays during his clinical and research work. 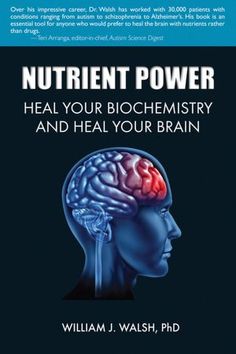 Psychiatry has made great advances in the past fifty years, but it needs a new direction. Today’s emphasis on psychiatric drugs will not stand the test of time. Recent scientific advances, particularly in the molecular biology of the brain, have provided a road map for the development of effective, natural, drug-free therapies that do not produce serious side effects. Psychiatric medications have served society well over the last fifty years, but the need for drug therapies will fade away as science advances.

Nutrient Power presents a science-based nutrient therapy system that can help millions of people diagnosed with mental disorders. The author’s database containing millions of chemical factors in blood, urine, and tissues has identified brain-changing nutrient imbalances in patients diagnosed with attention-deficit/hyperactivity disorder (ADHD), autism, behavior disorders, depression, schizophrenia, and Alzheimer’s disease. This book describes individualized nutrient therapy treatments that have produced thousands of reports of recovery. Dr. Walsh’s approach is more scientific than the trial-and-error use of psychiatric drugs and is aimed at a true normalization of the brain.

Depression, schizophrenia, and ADHD are umbrella terms that encompass disorders with widely differing brain chemistries and symptoms. Nutrient Power describes nutrient therapies tailored to specific types, not umbrella solutions to individual problems, and offers a groundbreaking approach to psychiatric health care. Updates to the paperback edition include sections on nutrient therapies for bipolar disorder, expanded chapters on depression and schizophrenia, and analysis of the latest scientific developments in brain research and advanced nutrient therapies.

If you’re enjoying the Myers Detox podcast, please leave Wendy a review in iTunes. Thanks!

#128 Anti-Aging Workouts with Tyson James Lee
#130 Can You Heal Your Thyroid? with Dr. Justin Marchegiani